CEO Jim Bange led Barwick Banking Company through a technological overhaul, including the conversion to its first modern core system.

At the start of 2020, Barwick Banking Company relied on paper ledgers and didn’t offer debit cards, let alone online banking. Now, a year later, the community bank in Barwick, Ga., offers all of that—and more—with an eye on expanding into new markets.

When Jim Bange closed on the acquisition of Barwick Banking Company in January 2020, he became CEO of a community bank that looked more like banks of 1950 than of 2020. Founded in 1907, the bank still used paper ledger books, did not offer debit cards and had zero internet presence.

“[The bank] had a small core system with the old black screens that you had to type codes into to find customers,” Bange says. “There were four employees: a cashier, a teller, a customer service person and the CEO, who has since retired.” 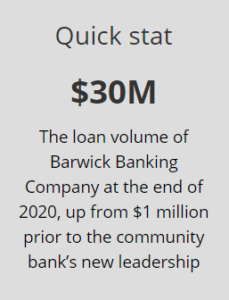 Before Bange came on, the bank served about 250 customers and had about $1 million in loans on its books. In the year since, the $50 million-asset community bank in Barwick, Ga., has blasted into the digital age. Today, it has a thoroughly up-to-date website, online and mobile banking capabilities, debit cards and a new core system. The transition to digital was part of Bange’s strategy to expand the bank’s reach beyond Barwick, a town of 237 people.

“When we purchased the bank, our plan was to expand into Florida—St. Augustine and Daytona Beach—and, because of that, we knew we’d need to have those digital products,” Bange says. “That would help us get a foothold in those areas, and we could expand that foothold when we open branches.”

Switching cores over a weekend

Barwick Banking Company opened on Main Street in 1907, just four years after the city was incorporated. Its one branch is still there today.

By late spring 2020, they had settled on Finastra’s Fusion Phoenix core system. Over the summer, Barwick Banking Company worked with the London-based company to create the customer codes, account numbers and other data points it needed, and then the team tweaked the system to suit bank objectives.

Next, the community bank found a provider, Jacksonville, Fla.-based Community Bank Connection, to get its website up and running, and then integrated the core into the site to create online banking opportunities, allowing customers to view accounts and pay bills online for the first time.

By the end of October 2020, Barwick Banking Company was ready to make the big switch. A typical transition to a core system involves automatically converting the data from the old system to the new one. But that doesn’t work when you’re going from virtually no digital data to a modern system. Instead, everything had to be converted by hand.

“There’s a bar next door to the bank, and they let us rent space during the day because we didn’t have enough room inside the bank,” Bange says. “We brought in a team and worked over an entire weekend manually inputting all of the customer information. We closed the bank on Friday at 4 p.m. and opened on Monday with the new system.”

The weekend-long conversion did the job. “The customers came in on Monday and wanted to make sure their money was still there, and that’s perfectly normal,” Bange says. “There were very minimal errors on the manual conversion.”

There have been a few minor glitches with the new system, Bange reports. For example, the team was hoping to issue debit cards by the end of December, but that was delayed a couple weeks.

“We’re working on [our digital banking services],” he says, “but [hiccups are] not something our customers [have] probably noticed.”

In addition to basic online banking capabilities, the new system allowed Barwick Banking Company to offer a mobile app and even remote deposit capture. The community bank is rolling out online account opening, which will facilitate the acquisition of customers outside the town of Barwick. It’s also launching an online personal financial management system that will allow customers to manage their finances and see their entire financial picture at a glance.

The transformation has already enabled growth in St. Augustine and Daytona Beach, which are about four hours southeast of Barwick. Bange has deep connections in that market already, having been part of the group to launch Reunion Bank of Florida in 2008.

“We’re getting calls every day from customers wanting to get back to community banking,” Bange says. “We feel there’s a niche there we can serve. Even though the name Barwick Banking Company is not familiar to that market, the bank has been around since 1907, so we’re focusing on the fact that it’s an old bank with good tradition that now has the technology they need.”

To help with the growth, Bange has hired 11 employees from his days in Florida, bringing the total employee count to 15.

“It’s really all about relationships, whether it’s employees or customers. That’s been the key to our success in the past and, we anticipate, into the future.”
—Jim Bange, Barwick Banking Company

“People enjoy working at community banks; there’s more of a family feel,” Bange says. “We can react quickly, and we can take care of customers quickly. I think employees like that.”

Bange says loan volume has grown from its previous figure of $1 million to $30 million as of the end of 2020, and deposits have grown from $12 million to $20 million. He estimates the bank has added about 200 new customers. Plus, he’s raised between $17 million and $20 million in capital to fuel future growth.

“It’s really all about relationships, whether it’s employees or customers,” Bange says. “That’s been the key to our success in the past and, we anticipate, into the future.”

Ed Avis is a writer for Independent Bank in Illinois and you can view the original article here.